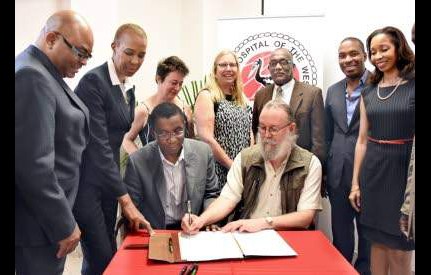 With diabetic retinopathy being the leading cause of blindness for people between ages 30 and 64 worldwide, the University Hospital of the West Indies (UHWI), with the help of Homerton University NHS Foundation Trust in London, United Kingdom, is on a mission to reduce the prevalence of the disease in Jamaica.

In this effort, the UHWI, last Wednesday, signed a Memorandum of Understanding with Homerton NHS Trust and launched the nurse-led Diabetic Retinopathy Screening Clinic which is to start screening patients this week.

The aim was to improve UHWI’s management of diabetic eye disease, with specific emphasis on diabetic retinopathy.

Diabetic retinopathy is a condition that occurs when diabetes affects small blood vessels, damaging the back of the eye which is called the retina. It can cause the blood vessels in the retina to leak or become blocked.

One method of management includes taking photographs of the back of the eyes with the use of a special camera called the fundus camera.

Through this relationship a reconditioned camera was donated to the UHWI Ophthalmic Division and two nurses received specialist training in London.

According to UHWI’s Medical Chief of Staff Dr Carl Bruce, UHWI is the only hospital in Jamaica, at this time, that can offer retinal surgery for retinopathy.

He said that by establishing the screening clinic, it will allow patients to be efficiently screened — as early detection and treatment will save sight — and also allow doctors more time to concentrate on treating patients.

While speaking to the Jamaica Observer on Wednesday, Dr Mowatt explained that before the establishment of the nurse-led Diabetic Retinopathy Screening Clinic, doctors would screen patients for diabetes affecting the eyes.

"It’s much more efficiently done if we do them in a clinic, where they just have photographs taken, then they can go through the door," she said, adding that doctors are freed up to do treatment.

"If patients are screened and the retinopathy detected, they can be referred for treatment," Dr Mowatt stated. "There are a lot of patients out there with diabetes who don’t know they have eye disease, because you can have eye disease and still see well, and then one day you wake up and the vision is darkened.

"This can be prevented if you are screened annually with a dilated eye examination, and once it is detected, we treat," she said.

Dr Mowatt explained that once the image is taken using the fundus camera, the image will be examined according to guidelines, and a grade will be given as to whether it is a normal or abnormal image.

If it is normal, the patient will be asked to return in a year to have the image done again, but if it is abnormal, depending on the severity, the patient might return in six months to recheck the image or be referred to the ophthalmologist who will decide on treatment.

One of the two nurses trained to do the screening, Rhona Ferguson, acting charge nurse, ophthalmology clinic and operating theatre, told Your Health Your Wealth that it is a screening process.

"So we are screening to identify the changes in the eyes after somebody has been diagnosed with diabetes. And if it is severe, we refer them to a slit lamp clinic to be seen by an ophthalmologist, and it is at that point they would decide on treatment," she said.

Meanwhile, the head of UHWI’s Ophthalmic Division said a reduction in patients with diabetic retinopathy will have an impact on people’s quality of life.

"If we can prevent the blindness, then we hope that we can get healthier people, more productive people, because a healthy nation is a productive nation. And also you find that things should improve overall; the burden on the hospital is less because we don’t have to spend so many hours treating... the disease," she said, adding that at this point, all the hospital’s resources go towards treatment.

She admitted to Your Health Your Wealth that she does not expect to see results in the first two to three years, as it took England 10 years to see the impact of diabetic retinopathy screening. However, she is looking to at least see an impact in the next 10 years or so, and is looking forward to the rolling out of other clinics across the island through the Ministry of Health.

"So we hope that by doing that (screening) — because if you keep your diabetes under control you do not get eye disease — so we hope that education, along with the screening, we are going to ultimately reduce the amount of damage done to the eyes from diabetes," Dr Mowatt explained.